Stop Comparing Response Rates — Why it’s a vanity metric for your business.

What you should look at instead for maximum results.

When investors talk “direct mail”, they usually bring up response rates. But in this quick guide, I want to show you how comparing response rates is a waste of time, and can actually HURT your expectations with mail.

Let me ask you this question:

If someone told you that they got a 10% response rate on their last mailing campaign… would you say that’s a successful mailing?

And that’s because you have no idea the result of that 10%.

“Final notice…” postcards were a big rage a while ago with investors. 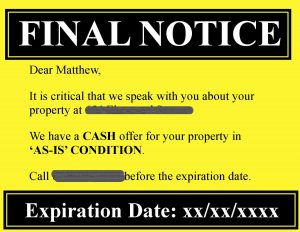 Investors were reporting big response rates from it.

But what a lot of them didn’t mention is that most of the responses (inbound calls), were angry people, non-sellers screaming, “get me off your list!”.

And what they failed to mention is that it took A LOT of postcards to acquire a deal.

Comparing response rates says nothing about the cost of marketing.

If someone in Southern CA, says he gets a .02% response rate, while another in the Midwest gets a 1% response… does that mean direct mail is more successful in the midwest?

And that’s because while the Southern CA person gets a lower response rate… he also gets a much HIGHER profit per deal.

What metrics should you be looking at then?

These two are far more important than response rates.

That’s why you should be comparing costs inside your own market… not from market to market.

We have a guide, that gives you the average cost per acquisition across the US.

And you’ll notice that in expensive metro areas… you’ll have costs per deal ranging upwards to $7,500+!

Why Marketing is an investment, not an expense…

That market that costs $7,500 to acquire a deal with mail, is that a bad investment?

Well… if in those markets, you produce an average of $30k NET per deal, would you consider that bad?

So what can you compare then if you can’t compare response rates OR even different markets?!?

And at Ballpoint Marketing, we take pride in knowing that our mailers and strategies are sometimes less than HALF the cost per deal than junk mail.

Yes… we are more expensive up front than your typical mailer…

But we produce better results. Which means a lower cost per deal. Which is one of the most important metrics to look at… not up-front cost.

If you want to discuss a mailing strategy with us…

Hop on a strategy call here.